Welcome everyone, what we have been waiting for months is here, in-game screenshots of DOTA2: 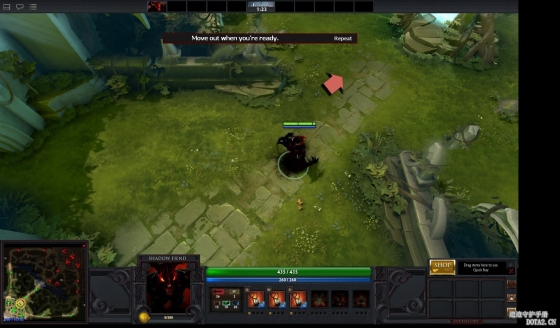 [UPDATED]: So, as it seems these screenshots might even be 4 months old. This just got posted on dota2.de:

Ok, this is probably not stop so quickly now. Some argue loudly Dota.cn (we are very sorry for something lost in translation) are the screenshots btw. so old to 4 months, and the current game, including the HUD to be heavily revised to give, so not too much at the screenshots (even my seemingly different , though there was no Photoshop in the game …). But as I said, I stress once again explicitly: some argue that, no more, no less. Forums Talk, Rumors, Gossip just the usual. Is that how far we know the latest in 3 days, that is: Calm down. There are only a few screenshots.

Also, as another note check what Tobi from joindota.com said about the screenies:

“Also on a side note, there have been some screenshots of DOTA2 being released from a chinese website, and there has been alot of feedback flooding through on forums. What I would suggest for most people who I know have been pawing over the screen shots, DONT. You are taking one frame of a game and then decoding the whole game from just that one frame. On wednesday you will see everything you have been waiting to see, and if you are impressed by what you see, just remind yourself, the game is STILL in BETA.”

The conclusion? Yes, these are screenshots of DOTA2 but we do not know how old they are, and as we said already, the current UI will be way improved. So, take this for the general models, actual surfaces and atmosphere but we’d recommend to wait until GamesCom (yes, only 2 days now!) to actually make any decisions on the game!

So, what do you think? Are you impressed yet? If not, just wait another two days and you will be! We are sure of it!