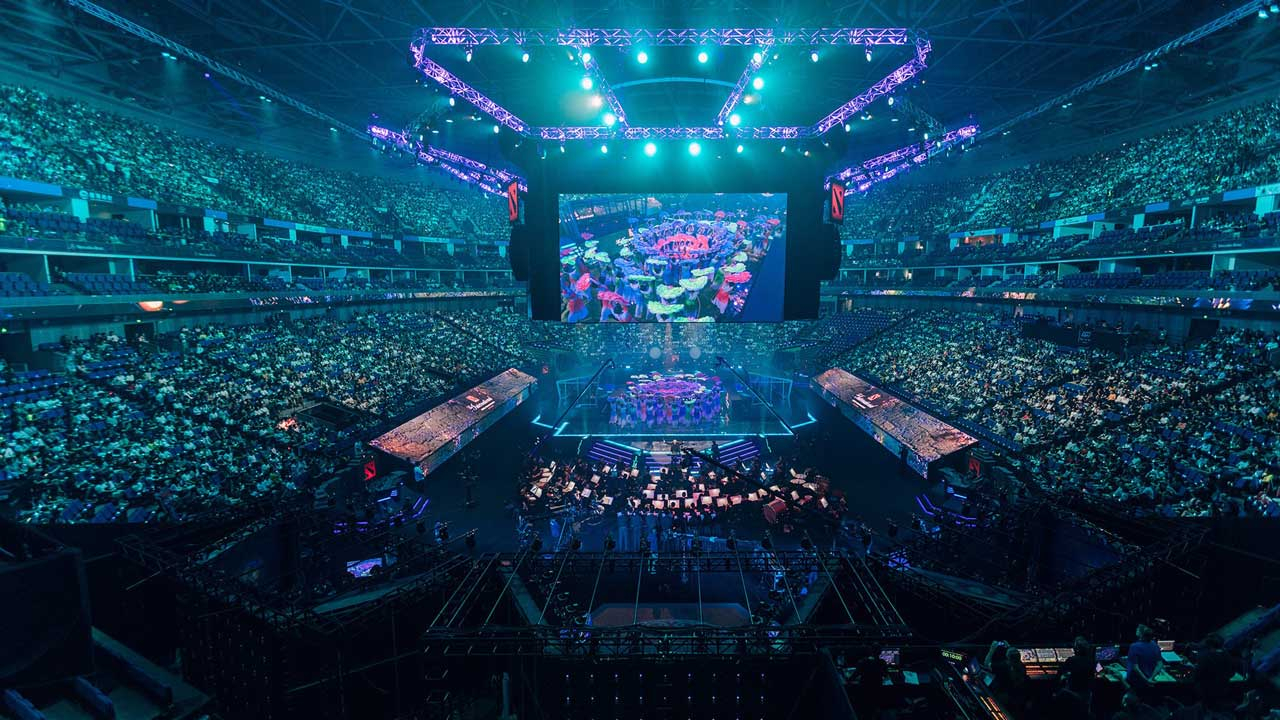 DOTA 2 is live through The International! Join us, it has began! [updated hourly]

Welcome everyone to The International! It is happening and it is live broadcasted to every corner of the earth! Stay tuned for all the news, results, replays and more from the GamesCom and DOTA 2! UPDATES will be being posted on a regular basis on this post so keep an eye out!

What are your first impressions of the game? I will say that I am impressed the graphics, the aesthetics, the physics and the flow of the game but at the same time a bit disappointed on the UI and the sci-fi looking models.

Let me elaborate a bit on my comments, the game looks good and feels like it has a lot of work put on it (unlike the UI) but I am really not sure yet about the models… I haven’t seen many games yet (still the first one is being broadcasted) but I get the feeling that the models are not as epic as I would expect. But then again, it’s only an “expectation” maybe we need a change. We will see. I will update often with more comments.

Check out the Tournament’s Team Scores after the end of DAY 1:

Our thoughts on the day

Hello everyone! With all of today’s group matches in the Dota 2 “International” tournament played and we got our first look at the game, we are certainly left with a big impression and a question we all have to ask ourselves: do we like what we see in Dota 2?

Now, after pondering through the official DotA forums and several others (*cough* HoN/LoL *cough*), most of the complaints about the game are the “ugly” user interface (which we mentioned in our screen shot leak would have improved by now), the visuals, and the seemingly different direction the game’s look and feel is heading towards. A lot of people criticized the similarities with LoL in terms of overall look as opposed to the darker and grittier HoN visuals. Most of the positive comments however, applaud the usability innovations and good interpretation of the original while still keeping true to its original’s gameplay.

Now in our side, we are really impressed with Dota 2! Not only are the technical aspects such as graphics, distinct art style (which is not similar to LoL at all), and audio amazing, which you’d come to expect of a Valve product, but the game has managed to stay true to its original gameplay. Sure there are some technical glitches and letdowns such as missing water reflections, animations and such, but we’d like to remind you that the game is still in BETA. That said though, we felt like some of the heroes had a lost a bit of their original charm and had a slight Sci-Fi feel to them (except Mirana, she’s a sweetheart).

With that out of the way, you surely must have been watching the live tournament streams! The 16 teams in the tournament are divided into four groups of four, and each team has to play against everyone in their group.

As for the games themselves, they are full of action, skill, and amazing teamwork. For anyone who is interested in trying out the Action-RTS genre, watching these matches would certainly give them an idea of what it’s like in a game of Dota. However, we’d like to point out that in the first match between iG and EHOME, the match turned into a farm fest and had hardly any action in it, which might bore and turn off the first time viewers of Dota. We have seen people writing about being bored of watching the game ourselves in the comments section of news sites. If they cared enough to stick and watch the other matches though, they would know just how awesome Dota 2 is!

The streams for the first 3 games had some lag issues to the extent of becoming un-watchable for some. We don’t know for sure what caused this, but most probably it is flaky connections in Cologne and large amounts of viewers, as the streaming site reported bandwidth issues. We hope they resolve this problem in the upcoming matches; we wouldn’t want to miss some hot Dota 2 action!

So, what do you think of the game and the tournament? Leave your thoughts in the comments section below.

Finally, you can watch the match replays as they are being uploaded here.

After some initial teething problems, we’ve wrapped up the first day of The International. If you missed the Live streams, you can head over to Wednesday’s Schedule to check out the first set of high quality 1080p replays, including the games that weren’t streamed live. For those of you looking for a spoiler-free experience when watching replays, bookmark the schedule page and avoid everything else on the internet until you’ve found out the day’s results. We will continue to encode and upload the remaining games until they are all up, so keep checking that page throughout the day to see the full set of matches. In addition to the results page, we’ll also be posting updates on our Facebook and Twitter accounts, so keep an eye on those.

Check out the Tournament’s Team Scores for DAY 2:

Today’s quarterfinal and elimination matchups produced some intense back and forth games. Highlights include a frantic come-from-behind win, a stunning upset, a Morphling farmed-up to truly awe-inspiring levels and the most awesome sentry ward we’ve witnessed.

Fans filled the Dota 2 arena to overflowing for the official opening day of gamescom 2011. Check out the crowds in dmp’s awesome Day Two photos, posted on playdota.com forums.

Bandwidth snags prevented the Russian and German language commentaries from airing live, but matches were broadcast in English and Chinese. Replays for today’s games with full commentary in all languages will be available on the Dota 2 web site here.

Our thanks to SGC, nevo, GGnet and OK.Nirvana.cn for traveling to Cologne and helping us debut Dota 2.

We have a screenshot from the game’s menu:

Among a lot of interesting things Gabe said the following.

The company plans on launching an invitational beta after the end of the tournament at gamescom but the game may not be fully released until 2012.

The game was earlier set to release later this year.

Our thoughts on the day

Hello everyone, all-in-all today was a great second day! The stream had a better “flow” everything was improved, less latency problems, less lag, better quality games.

We saw some very good games and some nice comebacks. Also, for those who missed a game, you can check all the games replays here. That is all for tonight everyone! See you tomorrow with more matches, more news and more DOTA 2!

Check out the Tournament’s Team Scores for DAY 3:

You may have seen graphs displaying the players’ excitement levels displayed periodically during The International tournament matches. This biofeedback data is collected using a wristband with custom hardware and works by measuring the electrical conductivity of the skin and sending signals to the player’s PC. The game collects this data continuously and plots the last two minutes of the player’s biofeedback history. Swings in a player’s emotional state, both positively and negatively, are represented by spikes in the graph.

Valve is using biofeedback and you heard it first from dota-two.com. This is great news! You have to give it to Valve. They are innovating like no other.

March to the Finals

This weekend is it. Yesterday we saw the most exciting game of the tournament in the elimination game between MUFC and OK.Nirvana.int. If you missed it, it’s a must see. Five more teams have been knocked out with four more facing elimination today, all leading to the Finals match this Sunday. How intense have these matches been? Well, we brought down the power on the tournament floor. Due to the power outage, the M5 vs. OK.Nirvana.int elimination match has been rescheduled for Saturday morning.

DPM has posted more photos from the event. Check them out here. If you haven’t already, take a moment to go vote for Dota 2 for IGN’s People’s Choice Award.

Check out the Tournament’s Team Scores for DAY 4:

What Does A Champion Truly Need?

The big news for Saturday is from the winners bracket; Na`Vi has advanced to the finals by beating Scythe.SG in two straight games. This victory also spots Na`Vi a win in the final series so they are already up against their undecided foe one game to nil.

In the losers bracket MYM was eliminated by EHOME. MYM is sent home with $80,000 and EHOME advances to Sunday’s playoff against Scythe.SG the same team that sent them down to the loser bracket with a resounding defeat on Friday.

Sunday will start with the best of three elimination series. The loser walks away with $150,000 and the winner will face Na`Vi in the championship match. In the final match the loser there earns a healthy $250,000 but it all pales in comparison to the ultimate champion and their $1,000,000 payday.

Can Scythe.SG turn it around after Saturday’s crushing defeat by Na`Vi and rise up against the two opponents that have beaten them at every meeting?

Can EHOME rise up out of the losers bracket and get revenge against Scythe.SG and then go on to defeat Na`Vi?

Or will the powerhouse of the tournament Na`Vi keep rolling over every opponent in its path?

The questions start getting answered Sunday morning in Germany at 10am CET. The final match to decide it all begins at 1pm local time in Germany or 7pm in China and Singapore, 2 pm in the Ukraine, or even 4am at Valve’s Head Quarters in Seattle. Watch them all live at Dota2.com.

Check out the Tournament’s Team Scores for DAY 5:

Check out the Championship Games only (spoilers ahead):

Congratulations to Na’Vi for winning “The International” and the first prize of $1 million!: